These last few days have been very trying for me. It is the one year anniversary of the suicide of one of best and closest friends. It still doesn’t seem real to me that he is gone, and I know that a lot of that stems from the fact that we rarely saw/spoke to each other. He was in the armed services and was usually overseas, but, when we did talk or get together, it was as though no time had passed at all! So, for me, the almost feels like business as usual. I keep expecting a call or text from him this entire year; something that is never going to come. To keep myself busy so I wouldn’t dwell, I decided that I was going to try out the new stockpot I got from my hunny for my birthday. Oh, and please bear with me. This is my first food post. I promise that subsequent posts will be better! Practice makes perfect, right?

I’ve got to say, I LOVE this stockpot!! It’s nice to look at and it cooked my sauce perfectly! There was no scorching whatsoever, which can be an issue when cooking a sauce for a long period of time. And, being a 12 quart pot, I can make a huge amount of sauce so that I can freeze some for later. I’m hoping to learn how to can soon, and I think that this pot will be a major staple in that endeavor!

It’s finally starting to cool down here in the south, although it’s going to be awhile before it gets “cold”…if it ever does! As long as I’m not wearing shorts on Christmas or New Year’s, I’ll count myself lucky. So, in honor of the cool down, I decided to make a large pot spaghetti sauce. It’s also one of my favorite comfort foods and a staple in our home. Now, I know everyone and their mother has a spaghetti sauce recipe floating around out there, but they’re all different and I figured I’d just throw mine in with the lot. I like to simmer my spaghetti sauce for hours, which makes the whole house smell divine! It can also heat up the kitchen, which is why I save the big batches for cooler weather. Well, that and hurricane season. Don’t want to have too much food in the fridge/freezer and then have a nasty storm come along! That’s never fun!

I learned the art of the spaghetti sauce from my grandmother and mother. I have since modified it to my own tastes and to fit the seasons. I take shortcuts during the summer months, but I decided to make a “real” sauce. This obviously requires many more ingredients than my shortcut sauce and a lot more time.

This picture actually doesn’t show all of the ingredients. I forgot the red pepper grinder, brown sugar, and parsley. This sauce is, as you can see, very involved and chock full of yumminess! I had half and onion and green pepper leftover from another meal I had made, so I used it and another green pepper and small onion. In the plastic bag is most of a small can of tomato paste that I had frozen. There are also pictured various spices, ground beef, 2 types of Italian sausage, olive oil, canned peeled whole tomatoes, and tomato sauce. I usually start by chopping the veggies up. Depending upon my mood, I either do a rough chop or a fine dice. This time around was somewhere in the middle. 🙂 Then, using kitchen shears, I cut up the sausage. I cut the hot Italian sausage into large pieces and the sweet Italian sausage into smaller pieces.  I then heated up about a tablespoon of extra virgin olive oil (I just eyeballed it) in the stockpot and added the sausage to brown.

After browning the sausage, I removed it with a slotted spoon and placed it in a bowl lined with paper towels to let the fat and oil drain off.  I then browned the ground beef in the leftover oil/fat and also removed it with a slotted spoon into a colander to drain off the excess oil/fat. Sorry, no picture of the browning ground beef. There was entirely too much steam! LOL I then sautéed the veggies in what was left in the pot (hey, I never said this was a healthy sauce!!). 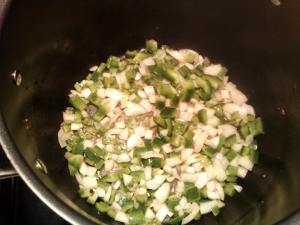 I sautéed the veggies just until the onions started turning translucent. Since this sauce was going to cook for hours, I didn’t want the onion to completely melt into the sauce. I added the paste at this point and just cooked it until it was heated through. Then I started to slowly add the cans of plum tomatoes to the pot. Do not throw away the cans after adding the tomatoes/sauce; they will be used later!  After the second can, I added the spices.  No measurements, I just completely covered the tomatoes with them. I mixed it all together and then added the other 2 cans of tomatoes. Side note: the particular type of canned tomatoes that I used occasionally had a leaf or two mixed in with the tomatoes. Be sure to take those out!  I then mixed in the meats and added the 2 cans of sauce. At this point, the sauce is REALLY thick. This is where the leftover cans come in. Fill each can with water so that you can get the bits of sauce left in the can and then add them to the sauce. I used 5 of the 6 cans for this, which was plenty of water. I also use bottled water instead of tap, but that’s just a personal preference. Once I added the water and mixed it up, I then added more spices. Again, I don’t measure, I just cover the top of the sauce with as much of the spices as I prefer. I generally completely cover the sauce with oregano, sprinkle a thicker layer of basil, and then just add as little or as much of the rest of the spices as I see fit. I also add the brown sugar at this point. It was about 3 or so tablespoons, which may sound like a lot, but it doesn’t really sweeten the sauce much. It just cuts back on the tart, acidic taste from the tomatoes.

A pity this isn’t scratch and sniff!

I let the sauce come up to just below a boil, then turned the heat low. I let it simmer for a couple of hours, stirring occasionally, and then tasted the sauce. I added more spices at this point because I didn’t think it tasted quite right. Then I let it simmer for another few hours before turning it off. I got a late start on it, or else it would have simmered for about 8 hours, instead of the 6 I ended up doing. But, that’s okay, because, when I reheat it, I’ll just start the sauce about an hour before I intend on dinner being ready. 🙂 That’s pretty much it. It sounds complicated; it’s not, I promise!

fresh ground red pepper (I like a bit of bite to my sauce, but not much!)

Heat the oil in stockpot and then add the sausage. Brown the sausage completely and then scoop out with a slotted spoon and into a paper towel lined bowl. Add the ground beef to the oil and cook until brown. Scoop the ground beef out with a slotted spoon into a fine mesh colander set in a bowl to allow the fat to drain off. Now, depending upon the type of beef you used, you may have to drain off some of the fat/oil left in the pot. Leave just enough to saute the veggies. Saute just until the onion starts to turn translucent; add the paste and cook until mixes thoroughly and heated through. Add 2 cans of the tomatoes (save the cans!!), mix, and then add the meats and spices (as much/little as you like; it’s to your taste!). Add the other 2 cans of tomatoes and mix.  Add the 2 cans of tomato sauce, stir to check the consistency, and then add water, using the cans to get all of the sauce out, to the desired consistency. Keep in mind how long you are planning on cooking the sauce. I used 5 cans of water because I knew it was going to cook it for 6 hours. Simmer it low and slow; about halfway through, stir the sauce and taste it. Add more spices, if needed. Continue to simmer the sauce until the flavors meld and it has reached the desired consistency.

That’s it. I like to serve mine over thin spaghetti with Parmesan cheese, a salad on the side, and garlic bread. This spaghetti sauce is a favorite with my family, and I hope yours will like it too! Thank you for hanging in there with me! 😀